Historically low interest rates and bargain prices have made homeownership the most affordable it has been at any time during the past 40 years.* And while the market won’t shift overnight, dramatic decreases in new home production and household formation suggest that as demand for homes returns over the next couple of years it could outpace supply in some places.

This month (click here to download the Item of Value) I have sent an interesting piece about the current state of the national housing market and the opportunity it presents for those who are ready to take advantage of it. Nobody knows exactly how the recovery will unfold, but over the long run, owning property in America has always been a solid investment.

Keep in mind that all real estate is fundamentally local. If you’re interested, I’d be happy to tell you more about the housing situation in our area. Please don’t hesitate to call and ask!
Posted by Brad Michels at 9:43 AM No comments:

Have you sent or received a friend request today?

The average Facebook member has 130 friends and is connected to 80 community pages, groups or events. The growing popularity of social media is a global trend that is difficult to ignore. Teens and young adults were the first to spend time socializing online, but their elders have recently discovered the benefits. Statistics show that adults over age 50 are the fastest growing category of social networkers.

In this months Item of Value (click here to download) I have an interesting piece about how social media use is changing the everyday lives of many families. It also includes information on some serious problems that teens could potentially encounter and tips to help parents protect their kids online.

I hope you are enjoying all of the wonderful things associated with the holiday season. Best wishes and Happy Thanksgiving!!!
Posted by Brad Michels at 6:09 PM No comments:

Posted by Brad Michels at 7:38 AM No comments:

A Holiday Budget is a Beautiful Thing!

The holidays are fast approaching. Have you started to prepare for this fun and exciting time of year? Unfortunately, many people could end up paying for the merriment long after it has passed.

Click Here, because this month I have sent some tips to help keep spending in check while still enjoying the fruits of the season. You’ll also find some practical gift-giving strategies.

I hope you and yours have a warm and wonderful holiday season! As always, please call if there is anything I can do for you personally.
Posted by Brad Michels at 10:58 AM No comments:

Are you a Winner or a Loser!?

You may ask yourself, what kind of question is that?
Well, check out this great article from my mentor and business coach Brian Buffini!! 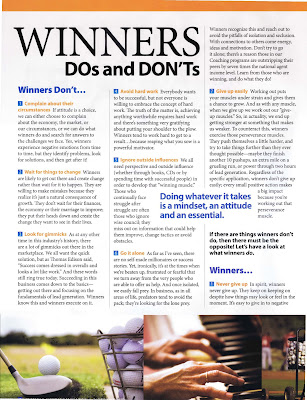 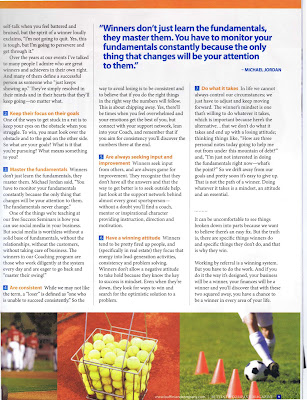 Posted by Brad Michels at 11:07 AM No comments:

September's Item of Value is a great jumping off point in getting you prepared for the future and protecting your estate. Please download and read this very important information, as it could save you thousands of dollars in the future!

Posted by Brad Michels at 2:17 PM No comments:

State of the market!

After a bit of a false inflation of the market with all the tax credits (proven by what we saw reported in July with record low numbers for real estate sales) the sky wasn't falling the market was re-adjusting, we're back to normal, or at least whatever we can call normal right now!

Home prices have crept up a little in lower end of the market and are still falling at the high end. Interest rates, while seeing some fluctuations over the past few days, are still at all time low's!

If you can afford to sell it's a good time to look at making a step up, or (if you're qualified) start looking for that investment property! And buyers can still make some great deals!

Remember there are twice as many millionaires made in a down market as there are in an up one!

If you have any questions about what's going on in real estate feel free to contact me anytime, I'm here as your resource!
Posted by Brad Michels at 8:21 AM No comments:

Should You Be a Trend Watcher?

In this month's Item of Value I have sent information about the most recent trends captured by a prominent survey of American architects.(Click Here to Download this months Item of Value)

Posted by Brad Michels at 3:30 PM No comments:

Posted by Brad Michels at 2:54 PM No comments:

It Just Keeps Getting Better!!!!

Posted by Brad Michels at 1:37 PM No comments:

Posted by Brad Michels at 1:40 PM No comments:

Posted by Brad Michels at 11:55 AM No comments:

Times they are a changing!

Here is the next new thing coming down the mortgage pipeline!

This is a reminder that as of April 2nd, 2010 the UFMIP (or Mortgage Insurance Premium) for all FHA case numbers ordered on or after this date will be increased from 1.75% to 2.25%. This means the closing costs to purchase your home are increasing! If you intend to do an FHA loan in the immediate future, you must order your case number NOW!

If you need a referral to a reputable, reliable lender. Call me and I'll be happy to get you connected with someone I know who will take excellent care of you!
Posted by Brad Michels at 11:23 AM No comments:

California buyers can begin claiming $10,000 tax credits starting May 1 under a bill expected to be signed soon by Gov. Arnold Schwarzenegger.

The state Franchise Tax Board on Tuesday estimated nearly 32,000 homeowners statewide might get the tax breaks. Buyers must close escrow or reserve a credit on or after May 1 and before or on Dec. 31 to qualify.

The governor signaled his intent Monday while signing two other budget bills. In a signing message, he commended the Legislature for approving the tax credit bill, saying it will stimulate "the housing industry, creating jobs for thousands of Californians."

Schwarzenegger proposed the housing stimulus in his January State of the State Address to help revive the California economy. The new state tax credit would take effect one day after expiration of a federal $8,000 tax credit for first-time homebuyers.

As was the case last year, buyers won't be eligible for the full $10,000 credit if they owe the state less than that amount over a three-year period. Buyers can get up to $3,333 off their tax obligation in each of the three years after buying a house.
Buyers must be at least 18 years old and be unrelated to the seller. They must live in the home they buy. First-time buyers are defined as those who have not owned a home in the past three years

This credit is equal to the lesser of 5 percent of the purchase price or $10,000, taken in equal installments over three consecutive years. Under AB 183 purchasers will be required to live in the home as their principal residence for at least two years or forfeit the credit (i.e. repay it to the state)." - Added exerpt from C.A.R.

Short Sales are the new solution for solving today's real estate crisis! Many of us bought or homes thinking that one day we would be able to refinance or sell. Due to recent economic times both of these options, to most, have become impossible. Trying to work with the banks to obtain a modification is almost a joke and the banks aren't working with homeowners to reduce their balances or recast their loans!


If you are like many of the 1 out 6 (that's 15%) people who are distressed (either in foreclosure or in default (30+ days past due)) then a Short Sale may be your best and only option.


I am a Certified Distressed Property Expert (CDPE) and I understand what it takes to navigate through the short sale process and I have the tools and skills necessary to get deals done. Take a look below at the outline of the many benefits of doing a Short Sale versus a Foreclosure. One of the most attractive benefits is that in the majority of situations all fees are taken from the proceeds of the sale. This means, in most cases, you pay nothing! 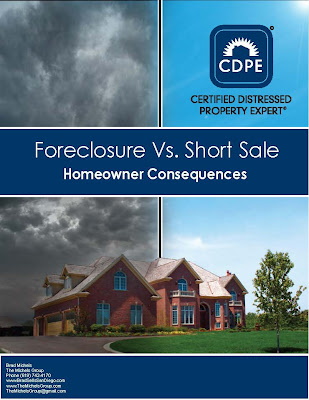 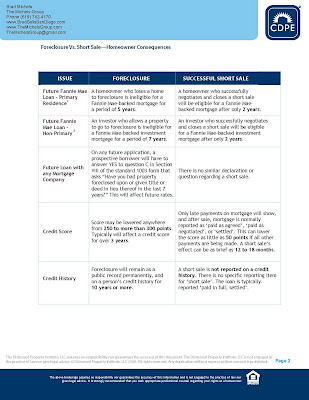 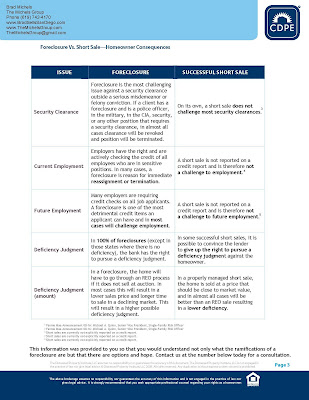 Don't trust just anyone to short sale your home. This is a job for an expert! A Certified Distressed Property Expert! YOU ARE NOT ALONE!!

Call me today and we can work together to find a solution that works for you!

Posted by Brad Michels at 2:19 PM No comments:

Posted by Brad Michels at 9:04 AM No comments:

Just in case you didn't see this...

90-Day Seasoning Waiver Expanded!
This update from FHA was released on Friday January 15th, 2010, as an excerpt from the CFR (Code of Federal Regulations) without a corresponding Mortgagee Letter and contains information about FHA's policies regarding the waiver of the 90-day seasoning required for sellers.

Here are the 6 things you need to know about these changes:

1. Waiver takes effect February 1st, 2010 for 1 year unless extended.
2. Investors are now exempt from the 90-day seasoning rule.
3. All transactions must be arms-length.
4. No identity of interest can exist between buyer and seller.
5. If sale price is 20% or more of the seller's acquisition cost, the lender must:
a. provide supporting documentation and/or a second appraisal and
b. order an inspection of the property and provide it to the buyer.
6. The waiver is limited to forward mortgages only.

To read the text of this waiver and specific details: http://www.hud.gov/offices/hsg/sfh/waivpropflip2010.pdf
Posted by Brad Michels at 11:12 AM No comments:

Brad Michels
San Diego, Ca, United States
"It's not about the shoes. It's about living the life you were meant to live!!" --Nike Commercial I provide real estate solutions for buyers, sellers and investors looking to grow their wealth through real estate.